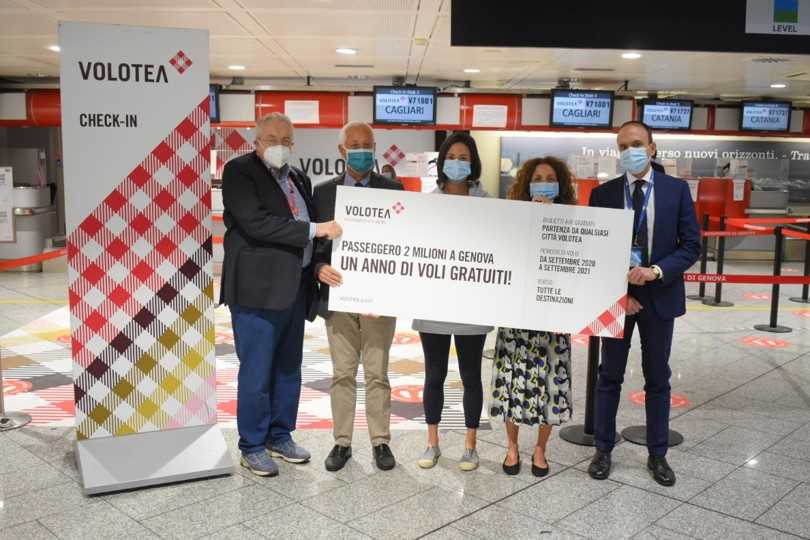 Virginia Fiorini, aged 30 from Chiavari, is the lucky passenger who won a year of free flights across the airline’s network

Genoa, 22 September 2020 - Volotea hit the two-million passenger mark on its flights in Genoa today, after only eight years in business. An important milestone, which, despite the uncertainties of the current time, attests to the carrier’s constant growth and was celebrated at the airport with a special ceremony including Valeria Rebasti, Commercial Country Manager Italy & Southeastern Europe at Volotea, Paolo Odone and Piero Righi, President and Managing Director of Genoa Airport respectively, along with Virginia Fiorini, the lucky passenger leaving on flight V71801 Genoa-Cagliari.

Virginia, a 30-year-old woman from Chiavari who alternates between working as a sales assistant and a dance teacher, is the second millionth Volotea passenger at Christopher Columbus airport and received a truly special prize: a year of free flights across the Volotea network. 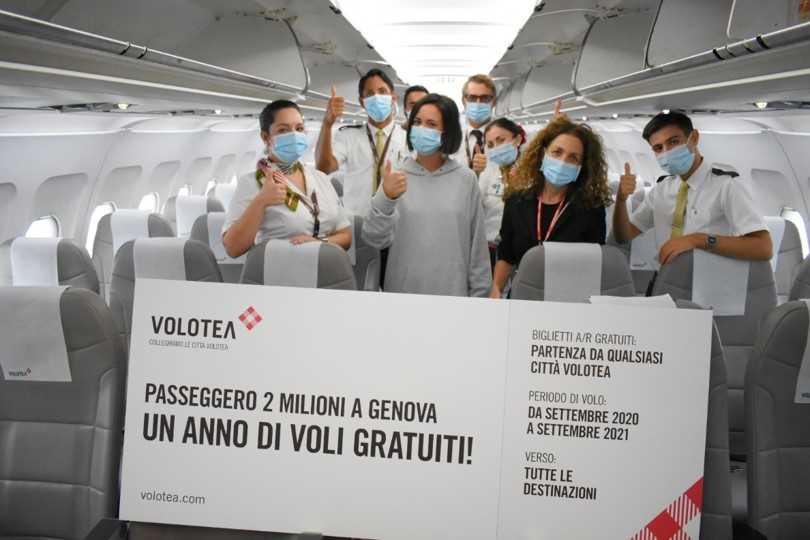 “We’re really excited to celebrate two million passengers at Christopher Columbus. This important milestone is the result of the perfect synergy that has been created by Volotea and Genoa Airport over the years,” commented Valeria Rebasti, Commercial Country Manager Italy & Southeastern Europe at Volotea. “A result that, in light of the recent evolution of the health crisis and the difficulties that the international tourism sector is facing, takes on new meaning and bodes well for the recovery of the aviation sector, not just in Liguria but throughout Italy. This summer, following the Covid-19 emergency, we reformulated our offer, increasing the frequency of flights from Genoa to some of the most attractive Italian destinations: in July and August, we carried over 72,600 domestic passengers, making us the biggest airline at the airport in terms of volume of flights (570) and seats for sale (over 77,260). We hope that we'll be able to celebrate new achievements at Genoa Airport in the near future, our reliable partner that has seen us grow flight after flight.”

“Volotea has been the main driving force that has distinguished our airport over the last few years, until the beginning of the pandemic,” said Paolo Odone, President of Genoa Airport. “Volotea is also the only carrier based here at Christopher Columbus, by which I mean with aircraft and crews that live in Liguria. This has facilitated the increase in routes, to the great benefit of the economy and tourism in our region. This is another reason why we are particularly committed to our partnership with Volotea and we are very pleased to see that two million passengers have come through Genoa Airport.”

You can book flights to and from Genoa on www.volotea.com or via a travel agent.