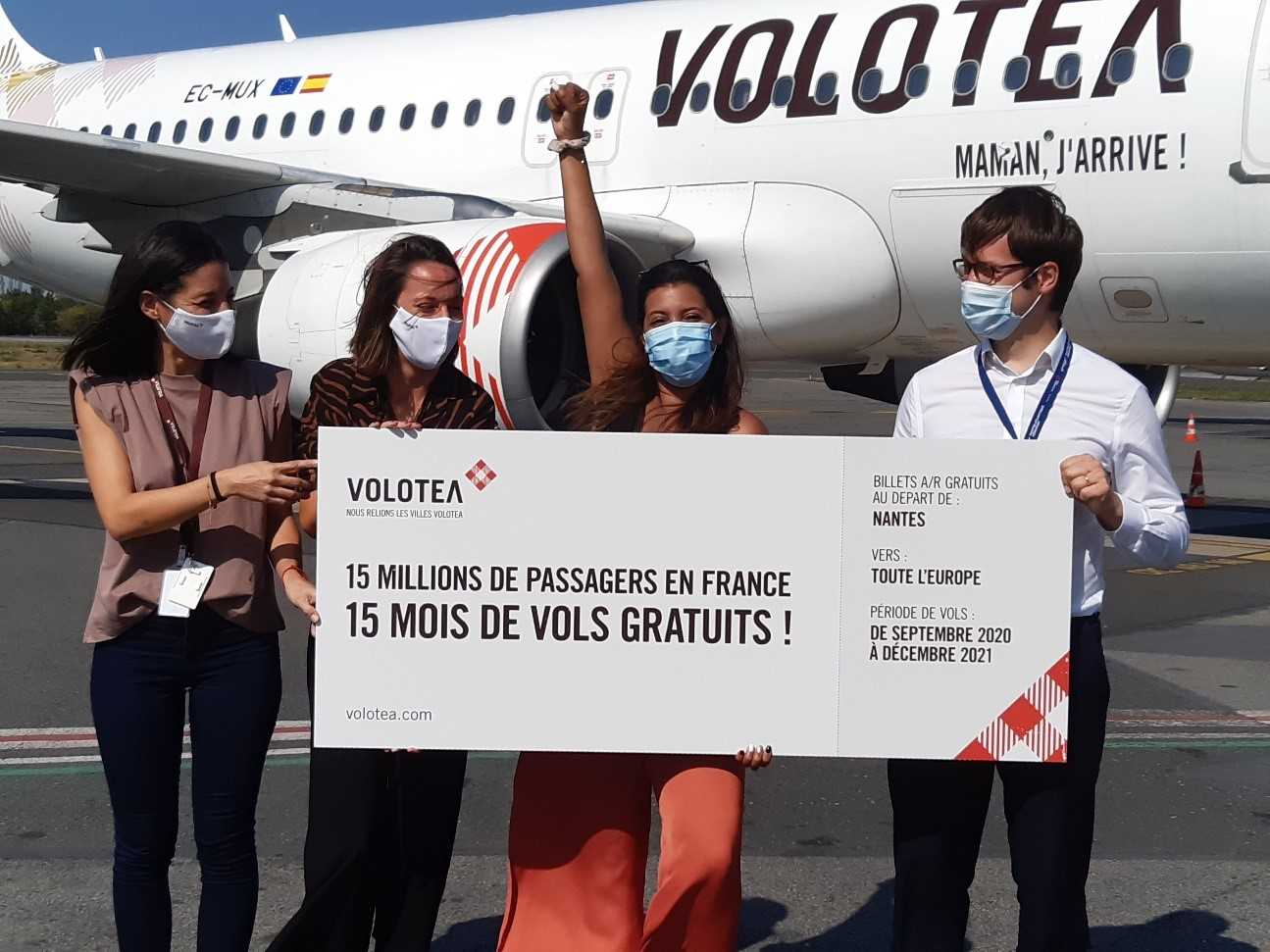 Despite the global health crisis, Volotea has recorded strong results this summer and is celebrating having carried 15 million passengers in France

Press release, 17th September 2020 – Volotea today achieved a total of 15 million passengers in France, after eight years of operations. The company decided to celebrate this milestone at its longstanding base in Nantes.

Volotea is today celebrating carrying its 15 millionth passenger from France since its launch in April 2012. The company has had a presence since its inception in France, where, in 2020, it operates over 160 routes, making the country its largest market. Volotea operates flights from 19 French airports and has bases in Nantes, Bordeaux, Strasbourg, Toulouse and Marseille with one opening soon in Lyon.

Nantes is the company’s primary base and was opened eight years ago. Nantes Atlantique has long been Volotea’s most significant airport in terms of volume (seats available and passengers carried), a position which has been maintained this summer with over 223,400 passengers carried to 21 destinations and an occupancy rate of 90.2%.

Qamar Laftissi from Nantes is Volotea’s lucky 15 millionth passenger in France. She received her special prize at Nantes Atlantique Airport: 15 months of free flights on all Volotea’s routes.

“We are delighted to celebrate our 15 millionth passenger in France. This is a key milestone for us after a hugely unusual summer, with the difficult circumstances created by the pandemic, which have affected our operations for several months and to which we have had to adapt. We have, however, succeeded in continuing to operate with optimal health and safety conditions and turned in strong results. We are especially happy to celebrate this milestone at Nantes Atlantique Airport, our longstanding base, which has allowed us to grow year after year throughout France and where we have registered an occupancy rate of over 91.1% this summer,” declared Carlos Muñoz, Founder and CEO.

“By choosing to celebrate its 15 million French passengers at Nantes Atlantique, Volotea is confirming its commitment to the openness and mobility of this region. In the context of the current health crisis, Volotea has successfully deployed its network to meet customers’ expectations, flying direct to 21 destinations from Nantes Atlantique this summer, including two new ones: Nice and Barcelona. The team at VINCI Airports is proud to remain Volotea’s primary base in Europe in terms of passenger numbers and to offer passengers a safe journey from their arrival at the airport until they board their plane.” added Cyril Girot, Director General of Nantes Atlantique Airport – VINCI Airports.